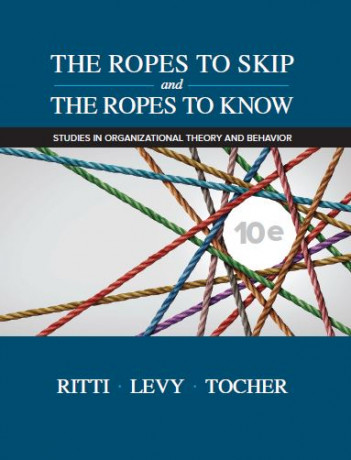 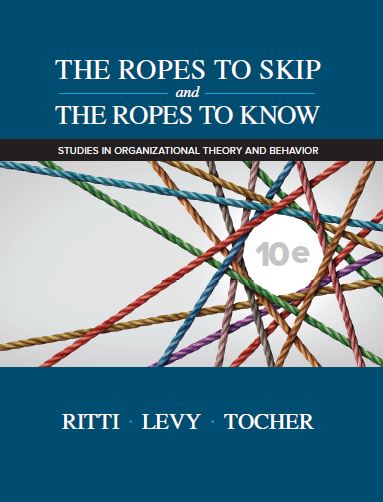 Ropes’ engaging stories of organizational life informs students of workplace realities. Throughout the book, brief descriptions of theory are followed by groups of illustrative stories. Since the stories are all based on real-life incidents, they help students understand how as well as why these sorts of events commonly occur in the workplace. “Culture” is often a key to this understanding.

Ropes deals with issues like culture, issues that are central to life in an organization. It can be difficult to learn about such issues as a participant because the most important issues are often unspoken, taken-for-granted rules for the day-to-day conduct of work. Indeed, experienced practitioners are often not aware of the rules they are following. Ropes makes visible the unwritten rules of organizations, such as the impact of stereotypes.

In Ropes, we focus on the day-to-day behaviors of corporate citizens and the values implicit in their words and actions as Stanley, Lesley, and Claude, our protagonists in the stories that follow, encounter puzzling events in The Company. Each one of their adventures is based on a real-life event.

New to this edition

The Ropes to Skip and the Ropes to Know, tenth edition, has been significantly modified to fit the changing economy but has maintained its unique cultural/interpretive perspective. Specifically, seven new thought-provoking chapters have been added which discuss the double-bind faced by female executives, job interviews, the downside of promotion to management, career transition, trust issues, and the career implications of having the right or wrong people in your life.

The elevation of Anne Wood to Chief Lending Officer and the first female Company executive is perhaps the most notable change throughout the text. Chapters 14 “Queen Bee” and 49 “To Bee or…” are entirely dedicated to Wood while many other chapters throughout the text such as chapter 12 “Scarlett Letter,” chapter 13 “Do You Have Questions,” chapter 33 “Who You Ganna Trust,” and chapter 40 “Career Women” discuss the double bind female executives fight. While Wood is initially perceived as tough, mean, and even “bitchy,” Stanley, Lesley, and others eventually realize that Wood is just another hard-working individual trying to gain acceptance in the rough corporate world. Wood will always be perceived as driven and demanding, but once members of the company get to know her, the reader discovers, as Pat Jones predicts in chapter 12, that “she is more human than you give her credit for, it’s mostly that your expectations of her are different.”

Job interviewing and the cultural consequences of small actions within the interview process is another new topic that is extensively discussed in chapter 13 “Do You Have Questions” and chapter 40 “Career Women.” These chapters clarify why actions such as poor social skills, asking odd questions, and failing to research the job expectations, the company, and/or job location often hinder or eliminate the candidacy of highly competent job candidates. These chapters also point out that those interviewing job candidates may not be technical experts with extensive knowledge about the competencies needed to perform the specific job for which candidates are being interviewed. That said, the junior associates who commonly interview job candidates for highly technical positions are experts on company culture and will eliminate candidates for minor missteps that suggest that the candidate may not be a cultural fit within the organization.

The downside of management responsibility is introduced in chapters 43 “New Supervisor Blues” and 52 “Being in Charge.” These chapters display that once Stanley and Lesley are promoted into management, they now must deal with myriad problems such as resistance to change, the loss of friends, loneliness, increased headaches, and the enhanced scrutiny managers receive from both direct reports and superiors. Reading and discussing these chapters will help students prepare for promotion to and within management and will also help them decide if they may even be a fit for managerial responsibilities.

On a similar thread, chapter 52 also highlights career transitions from middle management to high-level management as Stan and Lesley extensively discuss whether transitioning into executive-level positions is worth the trouble. While executive positions have their benefits (i.e. strategic control, increased compensation, high prestige), their downsides of missing family events, long hours, and being in the “hot seat” may not be worth it. And, the downsides may really not be worth it if the increased compensation associated with the executive position does not significantly increase one’s standard of living. Finally, while the transition may be worth it for many people, life stage also influences that decision as one may not want to transition to the executive level when their kids are in high school, their parents are aging, and/or they have other events going on in life that require a great deal of attention.

Trust issues are detailed in chapter 33, which is aptly titled “Who you Ganna Trust.” In the story, Lesley is given two poor performance appraisals in a row by her boss Ann Wood despite record-setting performance as a loan processor. The trust issues arise because Wood appears to dislike Lesley in the episode due to Lesley not participating in social outings, not viewing webinars during non-work hours, being of a different religion and age group as the rest of the staff, and reporting Wood to HR for not disclosing a travel reimbursement policy and not evaluating her fairly. The trust issues continue when HR sides with Wood instead of Lesley on the poor reviews, leaving Lesley torn about whether to leave the company or wait out the storm.

A final new topic raised in Chapter 49 “To Bee or…” is the influence of having the right or wrong people around you outside of work. Through the chapter, we learn that Lesley and Anne Wood have both recently gotten out of bad marriages. Lesley and Wood, like many executives with stress outside of work, used work as a distraction. This overworking may have been part of what led to their extremely high job performance, but it may also have inadvertently influenced their work attitudes toward colleagues. The chapter details other consequences of having the wrong people in your life. Specifically, angry, sad, or distracted colleagues may have other things going on in their non-work lives which affect their attitudes, energy level, and outlook. Further, colleagues do notice and make judgments about others when they are hanging with the wrong crowd, have a degenerate spouse, and/or are constantly taking care of degenerate family members. While it’s not fair to judge a person’s career potential on outof-work factors, it does regularly happen illustrated by the saying “If he or she can’t manage his or her personal life, how can he or she manage the department?”

Other notable changes to the book include integrating discussion of the high tech and the financial services industries with the manufacturing context of the text, updating the discussion questions, introducing four new boxes, and removing dated material. Importantly though, the text does retain the classic and timeless stories and discussion that has made it such a unique learning tool for over 40 years. The modifications noted above allow the book to better fit the changing economy while maintaining its unique cultural/interpretive perspective.