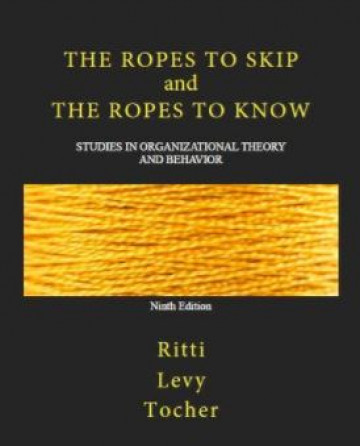 Now in its Ninth edition, The Ropes has been in continuous use for nearly 40 years. What accounts for its longevity? One reason is a bit unusual: Students actually like it. As an instructor, you may be surprised yourself occasionally asking students not to read too far ahead so that they can concentrate instead on the assigned chapters.

Unsolicited, one instructor shared these comments from an undergraduate’s paper:

Textbooks … are bland and throw information at you relentlessly [and] never go over how some of these things can actually happen. [The Ropes] really helps me understand the concepts that are talked about in the textbook. Many times when I am taking a test, I think about the stories if I am stuck on a concept. I believe that stories are easier to remember than some textbook chapter. (Personal communication)

Another reader, reflecting on his student days, noted that

“Ropes” is the only book that I read as part of my MBA coursework from which I actually learned something useful. I apply its lessons at work every day. It was as if the author had studied the firm I worked for and then wrote this book. (Amazon reviewer)

Thus The Ropes’ engaging stories of organizational life continue to inform our students of workplace realities. Throughout the book, brief descriptions of theory are followed by groups of illustrative stories. Since the stories are all based on real-life incidents, they help students understand how as well as why these sorts of events commonly occur in the workplace.

WHAT IS THE ROPES ABOUT?

The Ropes deals with issues that are central to life in an organization, issues of how the culture of an organization functions. It can be difficult to learn about such issues as a participant because the most important issues are often unspoken, taken-for-granted rules for the day-to-day conduct of affairs. Indeed, experienced practitioners are often not aware of the rules they are following. The Ropes makes visible the unwritten rules of organizations, such as the impact of stereotypes.

Secretary Hillary Clinton’s presidential campaigns of 2008 and 2016 provide examples. They vividly showed both progress and cultural resistance to women aspiring to the presidency of the country—or the company. Here was the first serious female candidate for the office, considered to be the “inevitable” democratic nominee in late 2007. Interestingly, as I write this in late 2015 she seems destined, once again, to be the democratic nominee in 2016. That’s progress (if you believe that gender should not be a barrier to high office). Further, the fact that she was defeated by an African-American for the nomination in 2008 may even show more progress (if you believe that race should not be a barrier to high office). Yet, during both campaigns, resistance emerged, too, in comments shouted at rallies, such as “Iron my shirt” and “Make me a sandwich.” Were these feeble attempts at humor or audible remnants of cultural stereotypes? Perhaps both. Certainly, the latter. And, throughout his presidency, Barack Obama has been readily criticized as “un-American” by many on the right and “not black enough” by members of his own race. Are these fair political jabs or more remnants of cultural stereotypes?

Both Clinton and Obama have to constantly balance role expectations when in the public eye. Most of the time, they both have to appear presidential and demonstrate that they are tough enough for the job, but also not too emotional. At the same time, certain mannerisms are expected from them given their gender and race respectively. For example, Secretary Clinton expressed her feminine side in a well-reported New Hampshire press conference. There, she became misty when asked how she endured the demands of the campaign. She also exhibited traditionally “male characteristics” such as being firm and decisive throughout the campaign. Yet, she never seemed too feminine or too masculine. Throughout his time in office, Obama has done a pretty good job at remaining calm and collected, especially in situations that involved possible racism such as the Michael Brown controversy in Ferguson Missouri in 2014. Yet, in an attempt to connect with African American voters as well as make a political point, Obama visited a prison in September of 2015. During the visit, he spoke with prisoners and gave a speech on how mandatory drug sentences were the reason that prison populations were at record highs. Such a move would likely have been unthinkable 20 years ago (many of the mandatory sentencing laws were written during the Bill Clinton presidency) and likely would not have been made by a white president, regardless of gender.

One lesson implicit in these observations: If you are a female or minority aspiring to high office (whether in politics or business), you must be careful about evoking cultural stereotypes. Beware the “double bind”: Act too “feminine/black/brown” and you will not be taken seriously. Act too “masculine/white” and you will be disliked. Naturally, to cope with a dilemma such as this, the first step is to recognize that it exists and then to identify its causes. But more about that in “Scarlet Letter,” the story of a rising young female executive, and “Praise/Criticism,” a story of how a young black professional employee is treated with kid gloves in The Company that we are about to enter.