Sam Fullerton returned to college after a two-year stint in the US Army where he served as the ﬁre control operator who was responsible for pressing the ﬁre button on HAWK missiles. Fortunately, since he was stationed in Bamberg, Germany, the button was only pushed during the frequent operational readiness evaluations. Upon being discharged, he took full advantage of the GI Bill to fund his way through college. His focus turned to marketing because of a great experience with his ﬁrst marketing professor, Dr. H. Robert Dodge. Sam went on to earn his BBA and MS degrees with majors in marketing at the University of Memphis or what he still refers to as Memphis State University. He went on to earn his doctorate in marketing at Michigan State University. Dr. Fullerton is a professor of marketing at Eastern Michigan University where his teaching emphasis includes sports marketing, sponsorship, and principles of market- ing courses. He also holds the title of Extraordinary Professor at the Potchefst-room Business School at North-west University in the Republic of South Africa. He has served as a visiting professor or visiting scholar at Waikato University in New Zealand, Queensland University of Technology and the University of Southern Queensland in Australia, North-west University and Durban University of Technology in South Africa, and the University of Michigan. He has occasionally served in the role of staff writer for Michigan Golfer magazine.

By his own admission, he played a lot of sports as a kid, but excelled at none. Albeit, he did once bowl on TV (and lost) as a 13-year-old. However, he was—and remains—an avid sports fan. This includes the four major sports leagues in North America plus cricket, rugby, and Australian Rules Football. Over the years, he has achieved some measure of success as a participant. He has several rounds of even-par golf, including his most recent at one of the University of Illinois courses. He is also an accomplished 10-pin bowler; his ofﬁcial average in league play exceeded 200 for over 15 years with his highest average of 216 recorded during the 2001–2002 season. His accomplishments include four perfect games, three of which were thrown in league play and certiﬁed by the United States Bowling Congress.

Among his favorite diversions are travel, photography, live theater, and classic cars. He has visited more than 40 countries, some of which provided the opportunity to experience sports like netball, cricket, and rugby ﬁrst-hand. And the travel has presented numerous opportunities to use his camera. While textbooks do not represent the best forum for displaying one’s creative abilities, he took the majority of the photographs in this book. He is a huge fan of theater and was once pulled from the audience at the Criterion Theatre in London, England, to take part in the production of The Complete Works of William Shakespeare— Abridged. Yes it was a comedy, and yes it was a brief appearance, but he has contemplated including “Shakespearean actor on London’s West End” on his resume. Finally, he still loves fast cars. He maintains a 1982 Corvette that he bought new while completing his PhD, but his treasured vehicle is his fast, red 1967 Plymouth GTX. The muscle car takes him back to the late 1960s where he once won his class in an NHRA national drag racing meet in his native Memphis, Tennessee, in his ’68 Road Runner. The photograph is of Sam minutes before he was clocked at 165.25 MPH at Daytona International Speedway.

Dr. Fullerton is the president of the Sports Research Institute of Plymouth, Michigan. In this capacity, he has consulted for numerous organizations including sporting goods retailers, publications, golf course operators, and the State of Michigan. His research on fans and sponsorship has been published in journals and presented at conferences across the world. His article on the four domains of the sports marketing environment was recognized by Sport Marketing Quarterly as one of the top 20 articles published in that journal’s ﬁrst 20 years. It is this article which represents the key constructs presented in Chapter 2. He feels fortunate to work in a profession that provides so much gratiﬁcation. The ability to teach college students the intricacies of marketing combined with the opportunity to focus on sports has meant that there has never been a morning where he dreaded going to work. 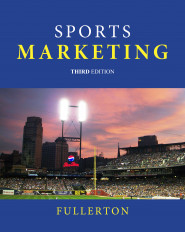